"THE LEADER WHO HAD NO TITLE"

Chapter 1. Leadership and Success Are Your Birthrights

Nobody succeeds beyond his or her wildest expectations unless he or she begins with some wild expectations. By Ralph Charell

The sight of an achievement is the greatest gift a human being could offer others. By Ayn Rand

There was a man whose name was Blake, lost his parents by a car accident and also his personal life was not very successful with his girlfriend. After the tragic moment of losing his parents, he decided to go to the army to Iraq. He has been spent several years there and it was already time to get back home. When he returned to the home he had nothing to do and there wasn't a purpose to live enthusiastically.

Chapter 2. My Meeting with a Leadership Mentor

The days come and go like muffled and veiled figures sent from a distant friendly party but they say nothing. And if we don't use the gifts they bring, they carry them silently away. By Ralph Waldo Emerson

One day, the old man came to him and talked a while about a leadership. That old man's name was Tommy who was his daddy's friend. He raised the concept about LWT which is Lead Without Title. Leadership has nothing to do with what you get or where you sit. Leadership's a lot more about how brilliantly you work and how masterfully you behave. Which means you don't have to have a title to be a leader. You just need to be a living human being. It became all about being the best I could be every day at work. The average life has only 960 months and only 29000 days which not too long to live as a human being. After explaining the importance of the LWT, the mentor Tommy brought Blake to other teachers who are the real-life experienced people.

Chapter 3. The Sad Costs of Mediocrity and the Spectacular Rewards of Leadership Mastery

Only the mediocre die always at their best. Real leaders are always improving - and raising their bar on how superbly they can perform and how quickly they can move. By Jean Giraudoux

Success is created through the performance of a few small daily disciplines that stack up over time to produce achievements far beyond anything you could have ever planned for. Failure, on the other hand, is just as easy to slip into. Failures are nothing more than the inevitable outcome of a few small acts of daily neglect performed consistently over time so that they take you past the point of no return.

He mentioned The 10 Human Regrets and The 10 Human Victories. You can think about that for your life which will be meaningful for you to analyze your reality.

Chapter 4. The First Leadership Conversation: You Need No Title to Be a Leader

The most common way people give up their power is by thinking they don't have any. By Alice Walker

The very first teacher of leadership introduced by Tommy to Blake was Anna who was a very beautiful woman. She taught about IMAGE which was 5 rule s of lead without a title philosophy.

FMOB- the First, the Most, the Only and the Best

Money, influence, and position are nothing compared with brains, principles, energy, and perseverance By Orison Swett Marden

Life begins at the end of your comfort zone. By Neale Donald Walsch

Chapter 6. The Third Leadership Conversation: The Deeper Your Relationships, the Stronger Your Leadership

The most important single ingredient in the formula of success is knowing how to get along with people. By Theodore Roosevelt

You get the best out of others when you give the best of yourself. By Harry Firestone.

No man will make a great leader who wants to do it all himself or to get all the credit for doing it. By Andrew Carnegie

Chapter 7. The Fourth Leadership Conversation: To Be a Great Leader, First Become a Great Person

If everyone was satisfied with themselves, there would be no heroes. By Mark Twain

Neglect, not your family

If one advances confidently in the direction of his dreams and endeavors to live the life which he has imagined, he will meet with a success unexpected in common hours. By Henry David Thoreau

At the end of the book the mentor Tommy has died and sent a letter to Blake by the other teachers. Made him inspirational and left Porsche which was Blake's dream car. I have briefly included the acronyms such as IMAGE, SPARK, HUMAN, and SHINE which have their own clear meaning. Based on the acronyms anyone can have deep thoughts about success and leadership. It is not only about leadership in the career but it has meaning about leading without a title which simply about is being best in your life wherever you are. 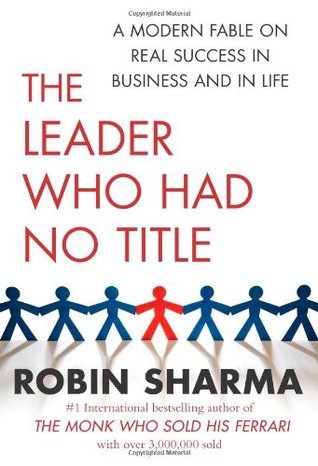